FREITAG: FROM ZURICH TO THE WORLD 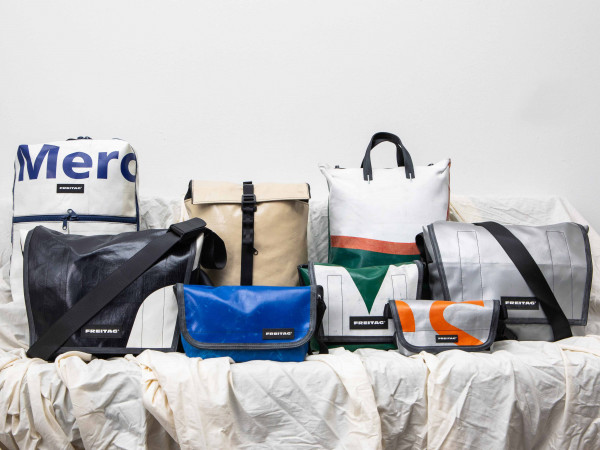 FREITAG Taschen (bags) are known all over the world, worn and loved by bike couriers and people who have simply been seeking a stylish yet functional bag. In the early 90’s two graphic designers, Markus and Daniel Freitag, were looking for a robust, functional and water-repellent bag to hold their work. We want to look deeper into FREITAG as a brand, its beginnings, prototypes and step-stones along the way to becoming the leading manufacturer of recycled bags and accessories.

The story of FREITAG began in 1993 when Markus Freitag was able to get his hands on a piece of old tarp in one of Zurichs less pleasant industrial areas. He brought it home in a trailer attached to his bike and heaved it up to his room in a rented flat, more of a dump really, with plaster peeling off the walls, and gas-powered flow water heater in the bathroom. Inspired by the multicolored heavy traffic that trundled past their apartment every day on a major Zurich transit route, he had made a decision:

To make a bag for cyclists, but one that would work for other people too. All made of recycled stuff like tarps, inner tubes and car safety belts.

In his room, between the mattress and his stereo system, Markus spread out the washed truck tarp and drew a pattern on it. The apartment was transformed into a bag factory, the bath was occupied with bits of truck tarp floating in blackish brew. The corridor was packed with boxes full of bicycle inner tubes. In the kitchen was an industrial sewing machine rattling from day to night that effortlessly surpassed the street noise.

In the meantime, Daniel Freitag, Markus’ brother had got back from a trip to the US and installed a computer and printer in the last free bit of space in the apartment. He was developing a database for orders, deliveries, inventories, etc. The two brothers barely ever slept during these exceptional circumstances.

On Thursday March 24th in 1993, from 6:30 pm on the Hardbrücke” in Zurich, the first FREITAG bag was welcomed to the world by a bunch of individuals with drinks served from gas canisters on the sidewalk next to the urban freeway.

Today, almost 30 years later, FREITAG has come of age and is synonymous with Zurich's ascent as a stylish and lively metropolis. FREITAG stands for innovation, creativity and environmental awareness. Due to the fact that they employ recycled truck tarps, each bag is unique and features different colors, sometimes logos, and textures.

Processes have been optimized and are run on a level that is way more professional than back in the 90s, and is now divided into five main steps:

Step 2: Cutting up the tarps

In 2014, with F-ABRIC, they gave themselves a new raw material to work with. Developed in-house from scratch, using bast fibers produced with a minimum of resources within 2500 kilometers of headquarters, they are rugged and completely biodegradable. F-ABRIC thus more than lives up to the FREITAG philosophy: Thinking and acting in cycles.

Explore a variety of Freitag bags in our shop - each recycled, each unique!