THE HISTORY OF C.P. COMPANY 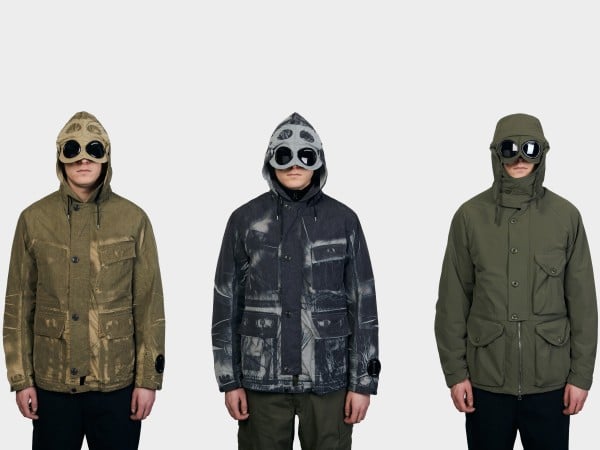 In 1971 Massimo Osti founded “Chester Perry” brand. Chester Perry is the name of the factory where Bristow, the hero of Frank Dickens’ strip, works. Massimo, working from his experience as a graphic designer, immediately created a distinctive style of communicating for his company: the toy car, the posters with their pop graphics and other props to give as gifts to shop owners. To print t-shirts, jackets and shorts Massimo employed methods that, at the time, were only used for paper: he made abundant use of the photocopier, employed screenprinting techniques and the 4-Color Process. He also started to experiment with garment dyeing methods.

1973: The invention of Garment Dyeing

Garment dyeing is the name given to a process pioneered by Massimo Osti and his collaborators for C.P. Company in the early 1970s. A garment – usually made from white or raw un-coloured fabric – is only dyed as a final manufacturing step, subsequent to being fully-fashioned, as opposed to the conventional method of manufacturing garments from pre-dyed fabrics. While techniques of garment dyeing have existed for a long time, Massimo Osti and his collaborators were the first to attempt the technique with garments made from multiple different fabric or fiber types. This process – which appears almost alchemical for those who witness it first hand – produces a chromatic depth and intensity impossible to achieve with pre-dyed fabric, as well as enhancing the material characteristics of the fabric.

In 1978 the English clothing brands Chester Barry and Fred Perry simultaneously took legal action against the Bolognese designer for, respectively, the use of their first name and surname. Massimo then decided to evolve Chester Perry into C.P. Company. This shorter, more mature name inaugurated one of the most explosive and influential bursts of creativity in the history of modern Italian fashion and would quickly make C.P. Company the essential brand of choice for Italian intellectuals and artists. For more than 45 years the brand has continued to pioneer its signature hybridization of archival military, work and sportswear models, combining them with intensely researched, cutting-edge, Italian fabric innovation.

1981: Synthetic fibres are Garment Dyed for the first time

The complex technique of dyeing garments comprised of both synthetic and natural fibers would become one of the cornerstones of C.P. Company.

Following further research into protective hoods used by the army, C.P. Company created several prototypes over the course of 1987. Anti-gas goods, a new inspiration, give him the idea of moving the lenses from the collar to the hood itself. The forms of this new version of the goggle jacket adopted the multi-functionality of Swiss field jackets whose intelligent pockets can perform numerous tasks. Another lens was added to the sleeve to allow the wearer to see his watch.

C.P. Company used a version of their Goggle Jacket to sponsor the 1988 edition of the Mille Miglia car race because it best corresponds with the vision of the perfect jacket to wear on any adventure. It protects the wearer from rain and mud and its system of pockets allows him to carry a full range of necessities, from identification papers, to a canteen and knife, to victuals and maps.

Under the supervision of Alessandro Pungetti, Gore-Tex created a hooded blouson with taped seams constructed entirely from 3-layer fabric with traditional linen outer face developed exclusively for C.P. Company. This was the first time in history that the waterproof membrane has been successfully garment dyed.