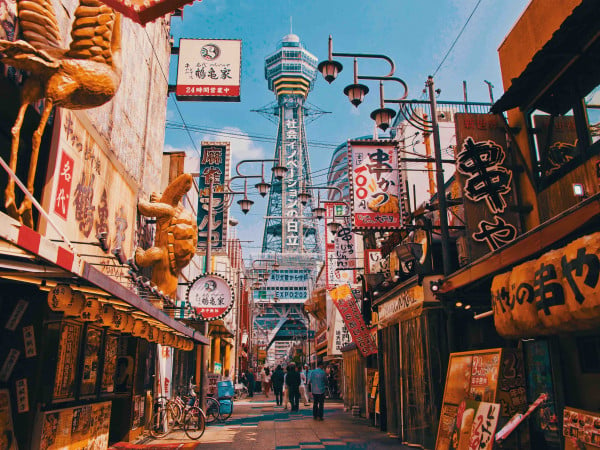 We have taken the arrival of our first FULLCOUNT delivery as a reason to finally write our own piece on the Osaka Five. Let’s dive into some denim history:

Japan and the United States have had a rather complicated relationship over the past sixty or seventy years. After being defeated in World War II, post-war Japan had a very different reaction to their conquerors than most conquered states throughout history: Japanese admired the US. Over the proceeding decades, they became infatuated, as parts of the American culture filtered over to Japan in the form of music, movies and fashion.

Japan’s love of American film had a similar effect in the realm of fashion. Japanese saw James Dean and Marlon Brando, role models in terms of the American way of life: rebellious, playful, spontaneous, and exciting. It was in many ways the opposite of the strategy that had elevated Japan to its post-war success in the 1970s and 80s: work hard, as late as possible. Staying inside society’s lines and blend into the crowd.

The very nature of Japanese society made it effectively impossible for most people to live an authentic American lifestyle in terms of adventure and freedom (as depicted in American film). So, subconsciously, men who were stuck in robotic office jobs decided that, if they couldn’t actually live an American lifestyle, they could at least dress the part on their days off.

Japan’s love affair with jeans was born because of the fact that no other commodity embodied the American ethos the same way that a pair of jeans ever could. If you wore a pair of vintage Levi’s and drove an old American car, then even if it was just for a little while, you could pretend that you were in the carefree world of free America. Eventually, the the widespread success of denim resulted in a gradual drop in quality, starting in the late 1960s. By the 1980s, jeans had fundamentally changed and were mass-produced on projectile looms that created fabric that didn’t seem as interesting or well-dyed as on vintage examples. Many of the most important details, like rolled belt loops or hidden rivets, had all but disappeared.

So Japan decided to turn back the clocks and change that. The Osaka Five were born.

Surprisingly, the revival of Japanese denim didn’t start in Tokyo, it happened in Osaka. As a comparatively free-spirited and relaxed region, Osaka was the perfect place for five companies to resurrect Japanese denim. The genesis of this movement can be traced back to 1979, when Studio D’Artisan was founded by Shigeharu Tagaki. The type DO1, an original contemporary classic design, is still made by the company today. Its leather patch may have parodied Levi’s - two horses trying to pull a pair of jeans apart on a pair of Levi’s, Tagaki substituted pigs - but the model was the making of a minor revolution. The jeans, replete with period details, including a buckle back, may have sold poorly at first, but this was the moment when the idea of premium, raw denim was invented. Or rather, remembered, having been sidetracked for the best part of 20 years.

After Studio D’Artisan had opened the door, designer Yoshiyuki Hayashi created his Denime label in 1988, focusing on a straight, fast-fading interpretation of vintage American jeans, notably Levi’s 501s from 1966. In doing so, he set the tone for the many Japanese reproduction brands that would follow. Yet arguably it was Hidehiko Yamane - the next entrepreneur to enter the Osaka Five - who would prove more pivotal than either Studio D’Artisan’s Tagaki or Denime’s Hayashi.

Yamane who was a tailor by training, made his first few pairs of more Americana-inspired, “anti-fit” jeans in 1988. After giving them to friends and receiving positive reactions, he and his colleague Mikiharu Tsujita (who would later go on to found Fullcount ) quit their jobs to officially launch the denim company with the aim of reinventing jeans as a premium expression of craft. Yamane first named the company ‘Evis’ in homage to Ebisu, the Japanese god of prosperity - but also with a nod to his jeans’ inspiration, Levi’s. It was a nod that persuaded the US giant to take legal action, forcing Yamane to rename his brand ‘Evisu.’ Unlike the other Osaka Five companies, Evisu expanded far beyond vintage reproductions to become well-known internationally and is undoubtedly the most well-known and successful overseas. They’re influential in the streetwear scene and have found an audience with hip-hop fans – far from the world of vintage-inspired clothing. In 2020, the brand even collaborated with US Rapper Travis Scott for an exclusive collection.

Tsujita who was initially a co-conspirator with Yamane, quickly decided to start his own company Fullcount, another of the Osaka Five. The brand was one of the first to use soft, long-fibre Zimbabwe cotton over other varieties and in order to create jeans that “feel so good that you don’t want to take them off until you get in bed.” More than the other Osaka Five brands, Fullcount is focused on everyday life and comfort – a true casual brand, rather than being focused on clothing that was intended to be workwear.

Founded by the Shiotani brothers in 1995, Warehouse was the last of the Osaka Five companies. The brand decided not to focus on directly reproducing vintage jeans but rather injecting their own ideas into original clothes that nonetheless had similar qualities to vintage jeans and was determined to modify and perfect details from vintage jeans. Their original fabrics were woven with intertwined threads, giving them a different quality from more conventional denim and the brand was particularly careful to sew their jeans with a certain number of stitches per inch. The 1001XX model being their flagship fit, embodied these details, among many others, such as iron buttons, copper rivets, a rayon pocket tab and deerskin leather patch.