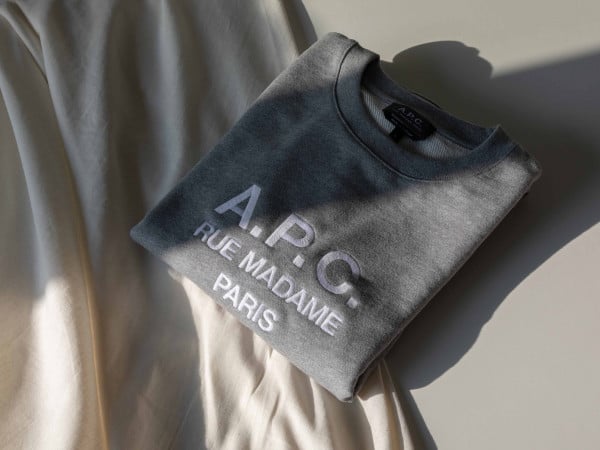 “When I try to define my craft, what it is that I do, I start to think that I developed something that’s also my own expression tool. This tool is A.P.C.” - Jean Touitou

After working jobs at KENZO and other labels, Jean Touitou founded A.P.C. in 1987 because of experiencing the hardships of finding nicely fitting clothes. When he lost his suitcase during a trip to Barcelona, he recalls the drama of finding a normal pair of jeans and a well proportioned sweater - thus he decided to do it himself.

At first his collections were not branded and were simply named according to the season - there was no A.P.C. label, just a label saying “HIVER 87” because he would have considered it too vulgar to have a brand name in the early beginnings. He later decided on the name A.P.C. meaning Atelier de Production et de Création (Production and Creation Workshop) as the brand attaches equal importance to both. Without production, creation remains at the idea stage. And without creation, a garment will have no soul.

The first collection was for men only, and mainly concerned with raw denim, suits and classic clothing. When a lot of girls started to come to his shop and dressed in the men’s clothes, he started to adapt androgyny as part of the brand’s identity. All those girls were told to dress nicely, in suits and proper coats, in order to be invisible thus thus the idea came up to turn things around. In order to take power they needed to look respectable and called themselves “revolution professionals”.

The raw denim became a strong A.P.C. signifier straight away so Jean Touitou went to Hiroshima because he had been told that the best denim fabric was made there. After doing some research and contemplating with the man who would later become his weaver, they found a kind of formula that made this fabric exclusive and inimitable. They shook hands hands twenty-seven years ago, no contract, no nothing, and they both kept their word.

Today A.P.C. is known as a French clothing brand, authentic and accessible by way of its style, prices and philosophy. While first gaining renown for its classic jeans in raw denim, the brand now offers a complete collection of men's and women's clothing and accessories that embodies a simple, casual elegance. Jean Touitou works with his wife, Judith Touitou, artistic director of A.P.C.

A.P.C. is above all a minimalist style. Jean Touitou assumes this absence of extravagance and this return to the essential: that is what makes the identity of A.P.C. Stylish and casual looks, inspired by everyday life. Jean Touitou always uses both classic and noble materials to offer quality pieces with timeless cuts.