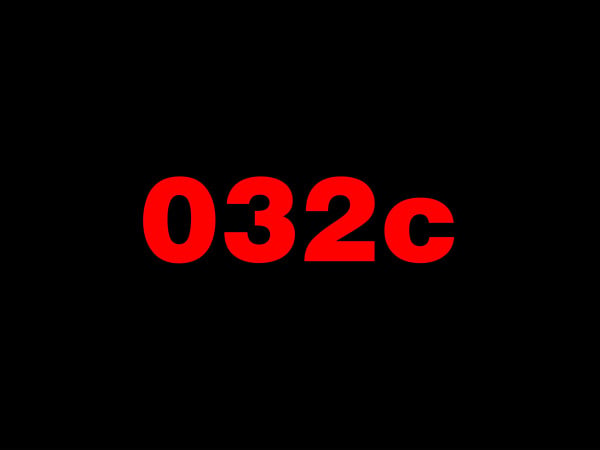 032c is a bi-annual culture magazine and brand covering art, fashion and politics, which has amassed something of a cult since its inception in 2000. It was founded by Joerg Koch in Berlin, and has gained popularity for its in-depth retrospectives on designers and artists such as Pablo Picasso, Azzedine Alaia, Rei Kawakubo, Raf Simmons and Nicolas Ghesquiere, along with editorials featuring Kim & Kanye, Angela Merkel, Bella Hadid and Frank Ocean.

Alongside thought-provoking journalism coupled with glossy photo shoots by A-list photographers, the magazine has simultaneously moved into the field of RTW fashion. Their apparel line owes a lot of its success to Joerg’s wife, Maria Koch, second half of 032c, who has previously worked as a womenswear designer for Jil Sander and consultant for Yeezy, and the magazine’s fashion director Mark Goehring.

Starting out with highly-coveted streetwear merch in 2016, like T-shirts, motocross jerseys and socks, 032c noticed the community’s hunger for more. Fast-forward to 2022 the brand has transformed into a fully-fledged fashion label in its own right with over 100 stockists worldwide, with some notable collaborations along the way, including adidas, Stüssy, Alyx, Gosha, Dave’s NY, Swarovski and Justin O’Shea’s SSS World Corp.

In January 2018 the label launched its debut runway show called “What We Believe” at Pitti Uomo in Florence, featuring their twist on workwear, with inspiration from Black Mountain College. Later that year, in November, their “Cosmic Workshop” collection - drawing inspiration from 90s rave culture featuring harnesses and a Buffalo-collab - was showcased in London and at David Lynch’s Silencio club in Paris in January 2019.

‘The mission of every 032c production is to inform, provoke, and activate the imagination. The 032c universe is a place for freedom, research, and creativity, where fantasy is reality, aspiration is attainment, and everything is culture in the making. And, like any universe, 032c is expanding.